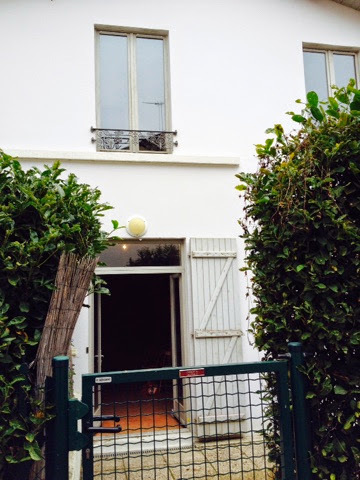 Bienvenue chez nous!
I must first admit that our petite maison is actually in a suburb of Lyon called Villeurbanne, not Lyon proper, BUT we are just 2 blocks north of the Lyon border. I think we're pretty well situated, suburban embarrassment notwithstanding, since we are 2 blocks from a supermarket and 3 blocks from the Charpennes metro station. (Which is only 4 stops away from the Hotel de Ville station, which is the heart of the city.) We decided to nickname it "the V-ban" as a rebranding effort so it sounds less like a suburb. Not sure if it impresses anyone else, but we like it!
We moved in on Monday, which was cold and rainy - the perfect weather for carrying one's worldly possessions into new accommodations - and have slowly been settling in. The new mattress we bought didn't seem to get too wet on the way inside, and since we had bigger fish to fry, I didn't bother using any brain power stressing about it.
In France, you buy your own appliances, even for a rental, so when we got here we had a sink and a water heater in the kitchen. And that's it. So please imagine my surprise when we unpacked our new stove/oven and I found this at the end of the electrical cord: 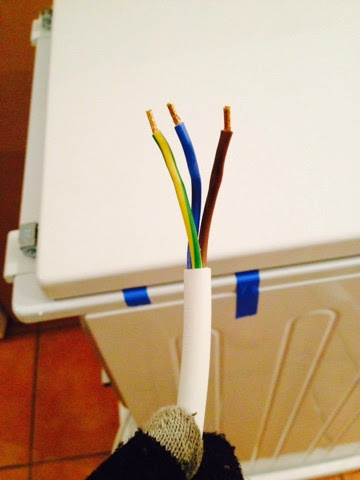 Guess it's not a plug-n-play situation. Please also note that I'm wearing gloves in my own kitchen because we didn't have heat yet - that first night with no heat was rather uncomfortable, as one might expect. We both slept in double socks, pants, two sweaters, and a scarf or hat. Good times.
On Tuesday, Alex had to go back to Grenoble for a dentist appointment, so I was left to my own devices. It was a productive day until I bought a bottle of wine, but I'll get to that later.
First the gas people came and turned on our service - whew! After that, I was able to figure out how to get the water heater going and the hot water flowing. The hot water is both for the faucets and the heating, so it was a pretty big deal. I first intuited that the thermostat needed new AAA batteries (which I luckily had in my backpack for some reason), before decoding the instructions for the water heater: 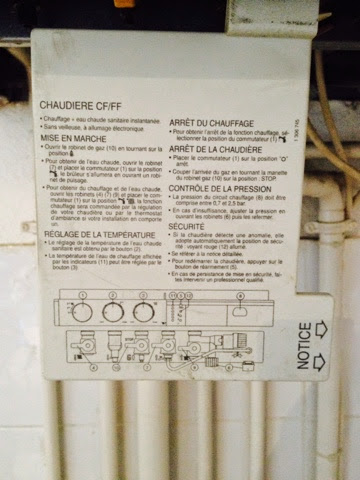 After a series of turning knobs and pressing buttons, voila! Heat!! I could strip down to just two layers of clothing instead if the three I had slept in! Major victory.
I assembled our IKEA kitchen table (victory) before heading to the supermarket, where I bought some basic provisions like bread, cheese, saucisson, and wine (victory). I also had a pleasant, if brief and extremely basic, conversation with the cashier (victory). Then I attempted to assemble the coffee table: 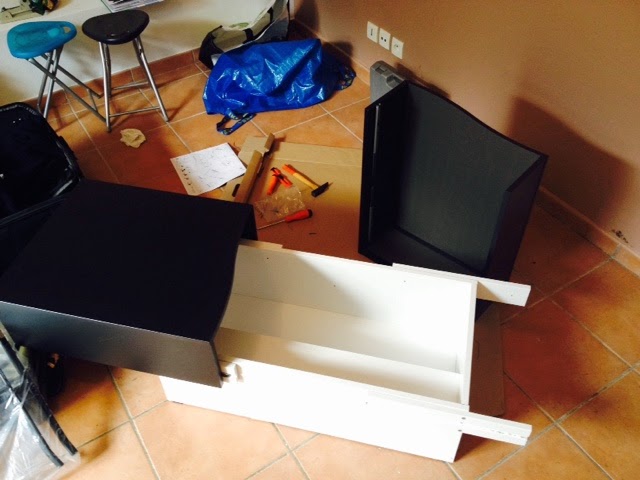 Yeah, it's not quite done. 3/4 victory. It was at this point last night - around 8 pm - that I pulled up a chair to the table, put a Community DVD on with my laptop, and poured myself a glass of wine. I felt like I earned a break for all the victories (partial or otherwise) I had racked up.
For the moment, I'm ignoring the pile of stuff that we don't have anywhere to put yet: 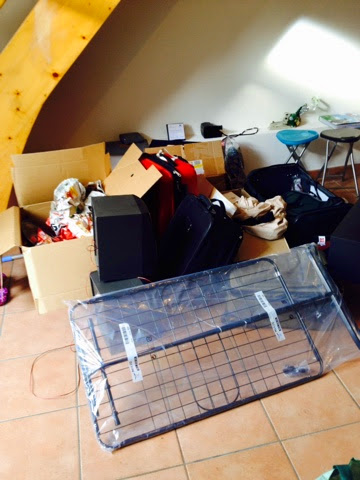 As well as the garden that needs some attention: 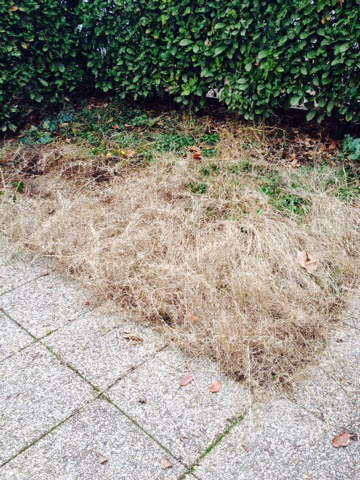 And I would be remiss not to mention the spider I encountered in the kitchen (bottle opener for perspective): 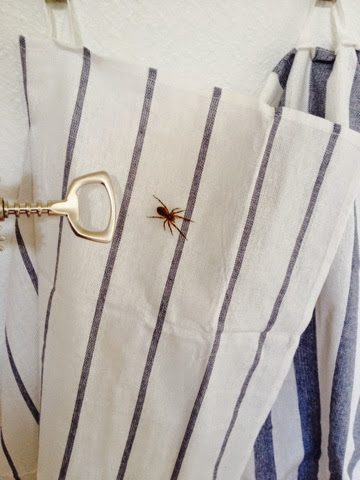 Alex did his part yesterday and returned with the rest of our clothes, some more provisions, and a French SIM card for me, so I finally have Internet on my phone again (major victory!).
The next step is to open my own bank account. Apparently you need to bring proof of where you live, so that will have to wait until we get a utility bill or statement from our apartment agency. Cause who doesn't love the exchange of seemingly unnecessary paperwork to conduct basic personal business?
So, all in all, I feel like things are coming along. I have yet to attempt to shower though since I can't figure out how to expand the curtain rod we bought...my first to-do for today! Hopefully the productivity will continue!
Posted by Lucy at 4:43 AM 2 comments:

It's been just a smidge over a week since I landed in France, to begin my ~11 month residency, so I thought I would post a quick recap of the impressions and thoughts I've had so far. I actually spent 6 days in Hamburg, Germany, visiting my sister's family, so I don't have many thoughts on the expat life in France...yet. However, I think the initial experiences I've had might be somewhat interesting. Food for thought, perhaps!

1) Je suis Charlie - The terrorist attack in Paris on the office of the satirical publication Charlie Hebdo has been front and center since I arrived. The attack took place the day before I left the US, and when I landed in Lyon two days later, two of the suspects were still at large. Of course, everyone is united in grief and solidarity for the victims of the attacks; there are "Je suis Charlie" signs up in business windows here in Grenoble, the servers at a restaurant in Hamburg wore the phrase on their shirts, and there have been massive marches in Paris in support of the victims. When I first heard about the "Je suis Charlie" movement, I was behind it too - boo, terrorists!! amirite?? - but it turns out that was a very simplistic view of the issue. Now I'm hearing it framed as a freedom of speech issue, which is turning out to be a bit problematic for many people. The main issue, as I understand it, is the double standards afforded in regards to freedom of speech in this country and, to some degree, in much of the rest of Europe. For example, how is Charlie Hebdo's offensive content different from "hate speech," which 54 people not related to the attacks were arrested for? Or what does it mean when world leaders march together in Paris, while in their own countries certain speech is restricted? It's a complicated issue, and I don't claim to be able to explain (or even understand) it fully, but it has been quite the backdrop for my arrival.

2) Apartment search - The day I landed, Alex picked me up and we hit the ground running, visiting 4 apartments in Lyon that afternoon. We decided to apply for one in the 6th arrondisement, and surprise! We were accepted! I'll have photos later, natch, but for now I can tell you that it's a small townhouse-like apartment with two bedrooms, a bathtub (yesssss!), and even a tiny yard for the puppy dog. It's also close to the Charpennes metro stop, grocery stores, and within a 30 minute walk to the Parc de la Tête d'Or. I'm very excited and will have more info on Monday when we talk with the estate agent. The interesting thing about renting in France is that you must provide your own appliances. Yup - we get a sink and a water heater and that's it! So our shopping list includes a refrigerator, stove/oven, and washing machine... In addition to all the furniture we need.

3) Hamburg-Geneva, Or, How I Learned To Stop Worrying And Love Ride-Sharing - This is an interesting tale. We flew from Geneva to Hamburg on Sunday and got a ride to the airport from Alex's dad. On the way back on Friday, however, we weren't so lucky, and had to find a way back to Grenoble from Geneva on our own. There is a bus service that we could take, but the tickets would have been 90 Euros for both of us. No thanks!! So instead, Alex pulled up a ride-sharing site, blablacar.fr, and looked for a ride for us from Geneva to Grenoble. We found someone leaving Geneva a couple hours after we landed (at around 3 pm), which wasn't ideal, but the total was only 25 Euros, so we booked it. We had to meet this guy at CERN, yes THAT CERN, the one that's going to create a black hole if they're not careful, because he was headed home to Grenoble and wasn't done with work until 5:15.

So we figured out how to take the Y bus from the airport to the CERN stop - a 30 minute ride that cost about 6 Euros each - before waiting outside of "Building 33" for our ride. The gentleman pulled up in his Prius and we all hopped in. We were stuck in traffic trying to get out of Geneva for at least an hour - no, I am not exaggerating - and you know what? I just happened to notice that we drove RIGHT PAST THE GENEVA AIRPORT. We had just taken a pointless, 12 Euro, waste-of-time round trip to CERN and back. Plus it was raining (see picture at bus stop) so I was also damp. We ended up getting dropped off at a bus stop outside of Grenoble around 7:45 that evening, waiting in the cold rain, until Alex's angel of a father appeared and picked us up. As you can imagine, I was thrilled. Oh, and did I mention that I already had a cold that began in Hamburg? So, after about 9 hours of travel that was only 1 1/2 hours of flight time, and involved way too much time lugging suitcases through the rain, I decided that I had better get used to not having a car of my own. Oh, and did I mention that Lyon has an airport of its own? #grateful #itsthesmallthings

4) Shampoo vs. conditioner - On a note so light it just might float away, I discovered that I don't need to use conditioner here. I don't know if the water is just super soft or what, but shampoo alone makes my hair soft and smooth. #thanksFrance

So there's the first 10 days in a very small nutshell. I'll continue to keep you posted!